Government of India’s delegation headed by Mr. Kunal Kumar, JS&MD (Smart City Mission) participated in the 13th Federal Congress of Urban Development Policy (Bundeskongress Nationale Stadtentwicklungspolitik) 2019, in Stuttgart. The study tour was enriched by exposure visits to several institutions and companies in Stuttgart region like -  a construction and demolition recycling plant (Heinrich Feeß GmbH & Co), the office of Stuttgart region planning office, the Mayor and urban planning department of the city of Winnenden and a visit to a new city district as part of the national garden show (Bundesgartenschau) in Heilbronn.

The primary objectives of the study tour were:

On day 1, the delegates visited a construction and demolition (C&D) waste management and recycling plant owned and maintained by Heinrich Feess GmbH & Co located in Kirchheim unter Teck, approximately 30 km distance from Stuttgart. The visit helped the delegates to understand the whole process of C&D waste recycling. Various products developed from waste recycling were also showed and explained to the delegates. 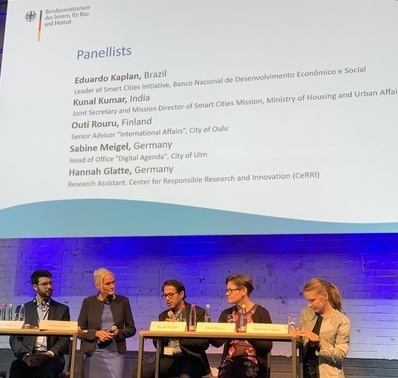 division. A brief presentation on the city with primary focus on stormwater management and land management was made by the city officials followed by a site visit to the urban development project “Arkadien”. The project followed integrated design principles in terms of energy architecture, sustainable materials, and water bodies. The boundaries between public and private are blurred, creating neighbourly and safe living environments. Sensitive urban designing with rainwater management as a vibrant feature underlies the total success of the development.

Day 3, 4 & 5 the delegates attended the 13th National Congress of Urban Development - Bundeskongress Nationale Stadtentwicklungspolitik 2019. The Conference was organised by the Federal Ministry of the Interior, Building and Community (BMI) together with the Federal State Baden-Wurttemberg, the Association of German cities and the German Association of Towns and Municipalities at Wagenhallen in Stuttgart. Current strategies and approaches to urban development policy were discussed and ideas for a shared, sustainable and integrated development of urban and rural spaces on national and European levels were presented. Various excursions, social events and a project fair complemented the conference programme.

On the last day the delegation visited the new city district at the National Garden Show in Heilbronn and had interactions with the Mayor of Heilbronn followed by a guided tour to the city exposition on sustainable building materials, storm water management and social housing.

The program ended with a session on reflections and learning with the delegation.